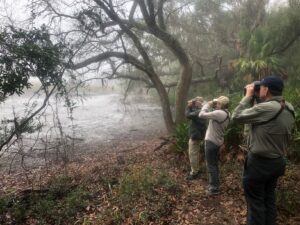 Cannon’s Point Preserve was designated as part of the Georgia Barrier Islands Landscape of Hemispheric Importance by the Western Hemisphere Shorebird Reserve Network in 2018. This designation recognizes the importance of this protected tract of land for resident and migratory avian species.

In 2018, the Preserve participated in the Christmas Bird Count along with Little St. Simons Island. Preserve Manager, Stephanie Knox, worked with volunteers, Bob Sattelmeyer and Dr. Gene Keferl, to lay out the routes for the new annual survey. Bob is also working with Stephanie to create migration surveys at the Preserve to better understand how the Preserve is used by various migrating birds during fall and spring migrations.

Cannon’s Point Preserve is listed as an e-Bird Hotspot by the Cornell Lab of Ornithology with 143 species currently identified.

THE UTILITY OF RIBBED MUSSELS TO ENHANCE LIVING SHORELINE SUCCESS

Professor John Carroll at Georgia Southern University started a research project along the living shoreline at Cannon’s Point Preserve during the summer of 2019.

This research is looking at the relationship and role that ribbed mussels play along living shorelines at Cannon’s Point Preserve and a couple other locations along the Georgia coast. Mussels were deployed along the CPP living shoreline in May 2019 and there was 100 % mortality which is believed to be due to predation. New plots were established in June and graduate student, Billy Annis monitors these monthly. Below is a recent update from Dr. Carroll on the project:

“The project is going along well. There were a few hiccups in the October and November sampling (lots of bugs, water being higher than anticipated, new undergraduates). Despite that, we were able to gather data and Billy was just out there yesterday. Overall, we have seen a seasonal pattern in shoot density and biomass, which just peaked in October-November and has started to decline on the most recent visit (See figure below). We anticipate the biomass will continue to go down into the winter months. The overall pattern of higher shoot densities in mussel plots continued into October. By the sampling we just did yesterday, only the highest mussel density (30 per plot) still maintains the elevated shoot density. We will continue to monitor the plots monthly through this next year.” 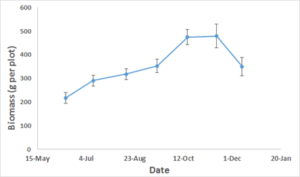 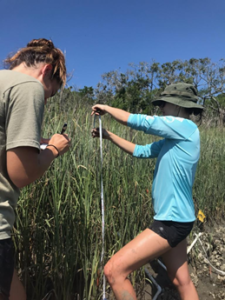 (Undergraduates Walker Kovach and Juane Schoeman working on the plots.)

WHAT FACTORS EFFECT THE DISTRIBUTION OF THE RIBBED MUSSEL (GEUKENSIA DEMISSA) IN THE GEORGIA SALT MARSHES?

Billy Annis is a graduate student at Georgia Southern University. He is studying the distribution and role of ribbed mussels in Georgia’s salt marshes. Below is an update from Billy on his master’s research project:

“Ribbed mussels are important intertidal bivalves for salt marshes along the eastern and gulf coasts of the US. Since they can increase health and growth of marsh grass Spartina alterniflora through nutrient inputs and sediment stabilization, managers are interested in their potential use for restoration efforts, such as living shorelines like the one at Cannons Point. Before they can be used for restoration, however, more information is needed on where and why mussels are distributed in Georgia marshes. My thesis project seeks to explore the factors that might affect the distribution of mussels in Georgia marshes, including recruitment, growth and survival. The first part of my project is to determine the distribution of marshes in Cannons point and the spatial gradients (ie. distance to main channel, elevation). The results from this work (see figure) suggest ribbed mussels are highest in the low marsh platform and in close proximity to creek heads, and they are rare along the marsh edge closest to the main water channel and also in the high marsh elevation platforms closer to forest vegetation.”

More information to come as this research project progresses. 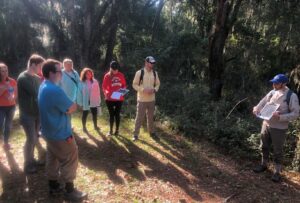 The St. Simons Land Trust is partnering with Georgia Department of Natural Resources, the College of Coastal Georgia and the University of Florida to monitor redbay trees (Persea borbonia) and their potential resistance to an invasive ambrosia beetle (Xyleborus glabratus).

This invasive beetle originates in Asia but invaded North America through the port of Savannah on shipping pallets in 2002. It has since spread throughout the entire coast of Georgia and sporadically on the mainland down to Florida and north into South Carolina. At this time there is no answer for stopping the spread. The beetle farms a fungus by boring into trees in the Lauraceae family (including our native red bays and the avocado tree) and leaves a fungus which inhibits the trees vascular system from functioning properly. 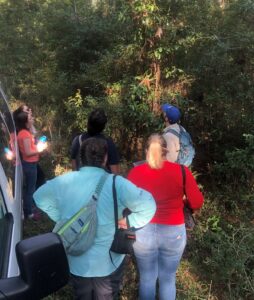 Cannon’s Point Preserve has a healthy stand of redbay trees which may be resistant to the fungus. A researcher from the University of Florida joined DNR Biologist and the College of Coastal Georgia’s conservation biology class to document, measure, record and take clippings from some of our large and healthy redbay trees.

The University if Florida has these clippings propagating in their nursery and the College of Coastal Georgia’s Conservation Biology class annually monitors the stand of redbays for any signs of the invasive ambrosia beetle (images below). This is a long-term project where the hope is to locate a resistant strand which can be propagated to help restore the coast’s native redbay population.

Dr. Patrick Griffith from the Montgomery Botanical Center in Coral Gables, FL came to Cannon’s Point Preserve in search of a rare plant species to obtain a “better biogeographic understanding” of the species. The Zamia integrifolia is the only cycad native to the United States and has only been located once on St. Simons Island in 1971. St. Simons would be its northernmost range.

Georgia Department of Natural Resources Biologists, Jacob Thompson and Eamonn Leonard, joined Dr. Griffith and Preserve Manager, Stephanie Knox, in surveying for the species but it was not located during the survey at Cannon’s Point Preserve. They also utilized this opportunity to quickly survey Guale Preserve but once again did not locate a specimen. Dr. Griffith would like to come back and do a more detailed search as these two surveys do not rule out the species existence on the island.

Zamia is a common cultivar in tropical and subtropical zones of the southeastern United States, including Georgia. These cycads resemble and are sometimes mistaken for palms or ferns, but they are not closely related to either group. The cycads are among the oldest living plant groups; the family Zamiaceae has a fossil record extending from the middle Triassic to the Eocene (54 to 200 million years ago).