Living shorelines are an alternative form of bank stabilization used in the place of a bulkhead or rip rap. They are designed to mimic natural banks and allow for ecological processes to occur while simultaneously creating essential fish habitat. The living shoreline at Cannon’s Point was completed in October 2015 utilizing 8,000 bags of oyster shells, spartina alternaflora plugs, and other native vegetation. This was the fourth demonstration living shoreline project in Georgia and the first to be accessible by vehicles, allowing it to be widely used for educational purposes.

Cannon’s Point Preserve’s living shoreline continues to provide both stability and essential fish habitat in Lawrence Creek. The upland component of the project has a large swath of planted muhly grass (Muhlenbergia capillaris) or sweet grass which blooms during October and through most of November, creating a lovely sea of purple for the fall.

This project continues to provide a great educational opportunity for various entities. Some of the groups that have come to learn about the project include, but are not limited to, Georgia Environmental Protection Division, GA DNR Coastal Resources Division permitting section, Honey Creek Episcopal Camp and Conference Center, Georgia Living Shoreline Work Group and the 2018 Regional Wetland’s Workshop.

Tate Holbrook and students in his Conservation Biology classes at the College of Coastal Georgia have monitored the living shoreline (LSL) site on Lawrence Creek annually since 2014, the year before the LSL was constructed. At the end of each growing season, they conduct transect surveys of intertidal benthic invertebrates and plants. Preliminary results are shown in Figures 1-2. The newly constructed LSL supported a rapid increase in population densities of the eastern oyster (Crassostrea virginica) and smooth cordgrass (Spartina alterniflora). Over the next several years, oyster and Spartina densities remained relatively stable despite Hurricanes Matthew (2016) and Irma (2017), and then increased further in 2019. The results of this study will help demonstrate the ecological impacts of LSLs on oyster reef and salt marsh-edge habitats in the highly dynamic estuarine environment of coastal Georgia. 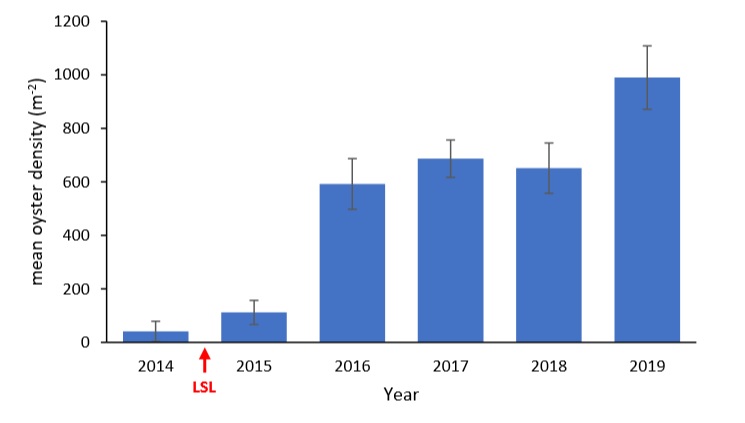 Figure 1. Mean (± SE) density of oysters (Crassostrea virginica) before and after the 2015 construction of a living shoreline (LSL) on Lawrence Creek, Cannon’s Point Preserve, St. Simons Island. Live oysters measuring at least 10 mm in height were sampled in 0.25-m2 quadrats along 8 transects in the lower intertidal zone at the end of each growing season. 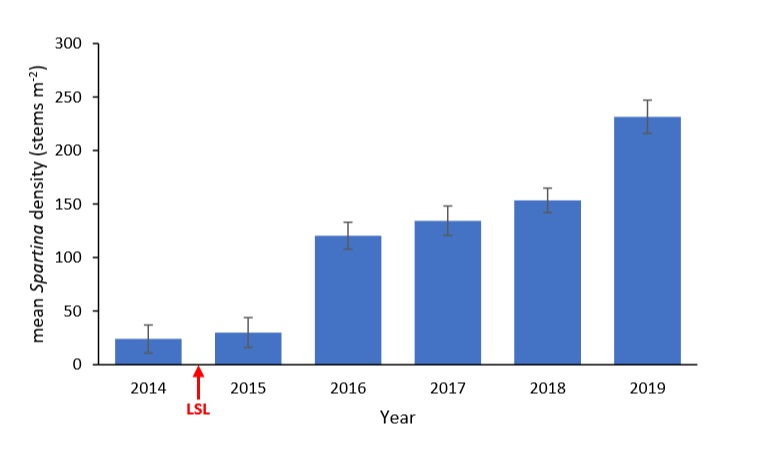 Figure 2. Mean (± SE) density of smooth cordgrass (Spartina alterniflora) before and after the 2015 construction of a living shoreline (LSL) on Lawrence Creek, Cannon’s Point Preserve, St. Simons Island. Plants were sampled in 0.25-m2 quadrats along 8 transects in the upper intertidal zone at the end of each growing season.