Bats are found throughout the United States and play a critical role in our ecosystems helping control insect populations and acting as pollinators. There are 40 species of bats found in the United States and Georgia is home to 16 species of them, all of which feed exclusively on insects. Coastal bat populations have not been thoroughly studied. The Georgia Department of Natural Resources (GADNR) began work in 2010 utilizing both mist-netting and acoustic surveys. Cannon’s Point Preserve is the only location on St. Simons Island where mist-netting surveys have been conducted, beginning in 2015. Mist-netting surveys are conducted by the GADNR at the Preserve on at least a biennial basis.

To conduct the survey, mist-nets are set up over a freshwater source, road, or trail. The fine netting is used to catch bats so that biologists can record sex, age, reproductive status, forearm length, weight, wing condition and any sign of disease. Bat surveys are listed in the Cannon’s Point Ecological Management Plan as a research need for the Preserve. There are a variety of bat species in coastal Georgia but there is one species that we are particularly interested in seeing, the northern yellow bat (Dasypterus intermedius) which is listed in Group D of the Georgia State Wildlife Action Plan (Georgia Department of Natural Resources 2005). Group D contains those species that exhibit rarity, endemism, or have been known historically in the state but have not been observed in recent years. Little is known about the northern yellow bat, and this survey method is believed to be a way to gain more information. It is known that they roost in dense clumps of Spanish moss, primarily located in large intact tracts of maritime forest. The over 440 acres of intact maritime forest at Cannon’s Point has the potential to hold a healthy population of these rare bats and could help strengthen the case for protecting maritime forest along the Georgia coast. 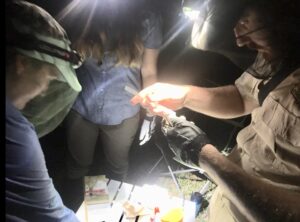 The annual CPP bat monitoring took place as part of bat blitz over a 3-night period in October with bat experts from GADNR and numerous other partners from as far as Kentucky participating in the event. The GBWG Bat Blitz captured 161 bats in total with 14 of them being captured at CPP. Impressively, the 14 captured at CPP included 5 different species, including two Georgia Species of Concern.

One of the Northern yellow bats captured was a recapture from 2018, which is the first recapture at this site. In addition to the recapture, GADNR also attached MOTUS tags to two bats-a Northern yellow and a Seminole bat at CPP. The MOTUS Wildlife Tracking System is an international collaborative network of researchers that use automated radio telemetry to simultaneously track hundreds of individuals of numerous species of birds, bats, and insects. GADNR staff have been tagging and tracking birds on the coast for several years using this system. GADNR currently has six towers on the Georgia coast, including one on St. Simons Island that will pick up signals from our tagged bats.

Tags are attached temporarily and should be picked up by the existing MOTUS towers when the bats fly by. This automated radio telemetry currently allows for the tracking of migratory bats over great distances. The tags are designed to last 60 days and for the first time, GADNR are attempting to tag bats as they are migrating down coastal corridors in the fall.

GADNR conducted mist net-surveys in September resulting in the capture and release of nine bats. The successful survey captured and released two evening bats (Nycticeius humeralis), two northern yellow bats (Dasypterus intermedius) and one tri-colored bat (Perimyotis subflavus). The northern yellow bat and the tri-colored bat are both species of concern in the state of Georgia and these species were banded prior to release.

GADNR conducted two surveys at the Preserve. The two surveys combined captured thirteen bats, two of which were northern yellow bats (Dasypterus intermedius) who were banded prior to release. In addition to the Northern yellow bats, nine evening bats (Nycticeius humeralis) were captured and released. One of the evening bats was a female and one was a juvenile male. The remaining bats were all adult males and all looked healthy when observed by the biologists, with no signs of white nose syndrome or other ailments.

GADNR captured and released eight bats while conducting mist-net surveys at Cannon’s Point Preserve. The captured bats included four evening bats (Nycticeius humeralis), three seminole bats (Lasiurus seminolus), and a northern yellow bat (Dasypterus intermedius). The male northern yellow bat was banded and released in the hopes that if it is caught again, a survey crew will be able to gain valuable information from it.

GADNR mist-netted at Cannon’s Point Preserve but had to end the survey early due to inclement weather. One seminole bat, (Lasiurus seminoles) was captured and released.