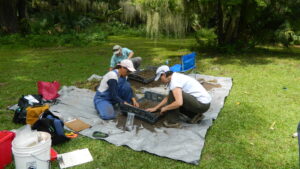 Cannon’s Point Preserve has been recognized as a property rich in cultural resources. These resources are an important part of our island’s history providing researchers with a better understanding of past life and the natural resources that supported it.

Research has documented Native American shell middens, or trash piles dating back to 2500 BCE. There is significant evidence of pre-historic Native American villages at the Preserve. The Preserve is also home to the Historic ruins of John Couper’s 18th-century showcase plantation house and some of its associated buildings.

Ruins are all that remain of the Preserve’s past and in order to obtain more accurate information about these structures and the property, archaeological research is conducted. We partner with the Coastal Georgia Historical Society for curation of all artifacts collected during research. This partnership ensures that all artifacts are properly documented and stored. The artifacts also remain local allowing for us to share the artifacts in display cases for events and educational activities.

Please remember that due to the sensitivity of the natural and cultural resources, no collection is permitted at the Preserve. Please respect all fencing, take only pictures, and leave only footprints.

Learn more about the construction of tabby at Cannon’s Point Preserve HERE.

The St. Simons Land Trust is partnered with the Coastal Georgia Historical Society which has an archaeology lab that houses all artifacts from Cannon’s Point Preserve since it’s purchase in 2012. Currently, Scott is working in the lab to help with analyzing data from Cannon’s Point. He has recently been working on putting together a 4,000 year old Native American pot which was discovered during the 2016 dig at the Preserve restroom site. 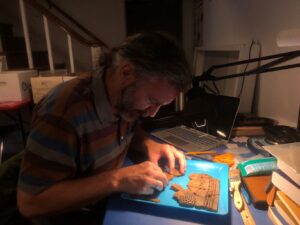 Georgia Southern University graduate student Scott Clark has been conducting his master research at the Preserve. Scott completed his archaeological fieldwork at Cannon’s Point Preserve for his masters thesis project in the summer of 2018. With help from local volunteers and Georgia Southern students, he excavated a portion of a prehistoric shell midden near the old Taylor’s Fish Camp at Cannon’s Point Preserve.

DECEMBER 2018 UPDATE:
“Analysis of materials recovered during recent excavations at Taylor Fish camp is ongoing. Nearly all identifiable types of Native American pottery are associated with the Late Woodland period (c. 500 – 1000 AD) and the Early/Middle Mississippian period (c. 1000 – 1300 AD). A few pottery sherds show evidence of artistic stamping on the exterior of the vessel.
Thanks to the generous support of members of the Coastal Georgia Historical Society, we were able to radiocarbondate materials from my excavation and previous excavations at Taylor Fish Camp. Results confirm what we expected and align with the pottery types. The earliest date (about 780 AD) came from a piece of charcoal in a shell midden, and the latest date (about 1280 AD) from charcoal in a nearby trash pit. A charred deer bone from another nearby pit dated to about 1050 AD. Results show that most of the shell, animal bones, and pottery sherds from my excavation were deposited around 900 to 1100 AD. These carbon dates, combined with other evidence collected in the area, have shown that people have been living and using resources at Cannon’s Point for over 4000 years.
Analysis of faunal remains from my excavation and a previous excavation will shed light on subsistence practices during the Late Woodland period. So far, identified mollusc species include eastern oyster, hard clam, ribbed mussel, stout tagelus, and periwinkle. Fish species include gaftopsail catfish, hardhead catfish, mullet, drum, and flounder. Other interesting finds include a gar scale, numerous fish otoliths (inner ear bone), catfish spines, hundreds of fish vertebrae, a piece of a crab claw, and a well-preserved pearl. There are also a good number of turtle shell fragments, many of which look to be diamondback terrapin. These results are indicating a heavy focus on estuarine resources, especially fish and shellfish.”

JUNE 2019 UPDATE:
“Identifications of ceramics and faunal remains from the 2018 Taylor Fish Camp excavation are complete. The pottery types are associated with the Late Woodland (c. AD 500 – 1000) and Early/Middle Mississippian period (c. AD 1000 – 1400). Results of radiocarbon dating from multiple locations around the site confirm those dates, showing the Taylor Fish Camp area was used heavily during that time. I looked at over 30,000 pieces of invertebrate and vertebrate remains discarded by Native Americans during those periods. Common invertebrate species were eastern oyster, clam, ribbed mussel, stout tagelus, along with smaller numbers of whelk, periwinkle, and a few pieces of crab claws. The animal bones were almost entirely from turtles and fish. The most common fish were saltwater catfish, mullet, and killifish, with smaller numbers of flounder, menhaden/shad, sheepshead, and several species of drums such as trout, redfish, stardrum, and croaker.
The next step is to continue analysis by quantifying the results in several ways and figuring out what it all means! The use of fine-meshed screens while excavating is giving us a more accurate picture of subsistence practices by showing that small-sized fish were an important part of their diet. All the fish species identified could be captured very near the site location and likely required traps and nets. A final report will be finished by the end of [2019].”

DECEMBER 2019 UPDATE:
Scott Clark successfully defended his master’s thesis this past fall at Georgia Southern University. Scott was able to provide the below update on the conclusion of his research.

“The Georgia Southern University master’s project on Native Americans living at Taylor Fish Camp is complete. The types of pottery sherds, radiocarbon testing, and structural evidence, show that the site was heavily-occupied from approximately the 8th to the 13th century. Animal remains collected during excavations in 2014, 2016, and 2018, reveal that subsistence strategies focused heavily on shellfish and shallow-water fish. By attempting to identify over 30,000 fragments of shell and bone, I was able to gain an idea of the most commonly-used resources. The types and sizes of species identified also help us to understand the most frequently targeted habitats, the time of year they were captured, and the technology used to capture them.

Shellfish consisted of mostly stout tagelus and oyster, followed by ribbed mussel, hard clams, periwinkles, and eastern mud snail. The vertebrate bones excavated from the site were almost entirely fish and diamondback terrapins. Mammals such as deer, raccoon, and opossum were present but in low numbers. Catfish were the most dominant fish, followed by mullet and multiple species of drum, menhaden/shad, flounder, sheepshead, and stingrays. The use of very small archaeological screens indicate that killifish (mudminnows) and fingerling mullet were caught in large numbers. All the fish identified could be caught in the estuaries surrounding the peninsula, especially during the warmer months. Mass-capture methods such as traps and nets were likely used. Comparison with other studies in coastal Georgia suggest similar lifeways, as prehistoric residents focused on the same group of resources, with only slight differences related to site location. I am grateful that St. Simons Land Trust allowed me to carry out this project and look forward to more research at this unique location.” 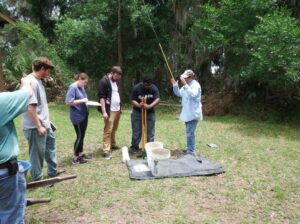 These reference points were recorded using sub-centimeter GPS technology and will serve as a valuable tool for a wide variety of researchers needing precise locations of cultural and natural resources on the property. Georeferenced benchmarks provide a physical backup to GPS technology, and are highly recommended for the benefit of land managers and various researchers wishing to study and preserve the peninsula.

(GPS coordinates being collected for the benchmark location.) 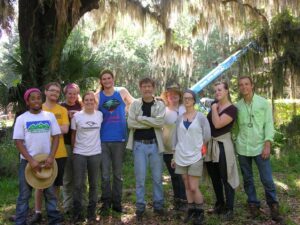 In 2015, the University of Tennesse at Chattanooga sent their 2015 Archaeology Field School to Cannon’s Point Preserve to conduct Phase 1 surveying at the north end of the peninsula near the Couper main house ruins. Dr. Nicholas Honerkamp and his field students, along with the help of volunteers, added to the body of knowledge at this intriguing site during four weeks from May 13, 2015 – July 10, 2015.

The field school gave eight students a basic understanding of methods used for excavation out in the field. Phase I surveying is a basic survey and involves digging several small holes equally spaced on a geometric grid, whereas Phase II involves testing and usually consists of 1 x 1 meter or larger test units.

The purpose of the survey work was to determine the boundaries of the site, both prehistoric and historic. This was done through excavation and screening of 30 x 30 centimeter survey units in 20 meter intervals. The grid extended away from the Couper main house and was laid out using a total station with sub-centimeter accuracy.

The results from this survey are an extremely useful tool for the Land Trust to know where future research should be conducted. Surveying also gives a better picture of the kinds of artifacts that are present and where auxiliary structures are located. The Couper Plantation is full of mystery and wonder, and archaeologists are working hard to uncover and piece together the history at Cannon’s Point Preserve.