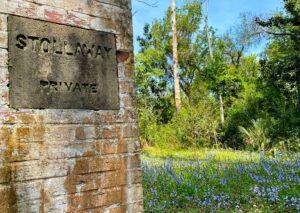 In May of 2021, a member of the Land Trust staff reached out to Arny Stoller, the son of the original owners of the “Stollaway” property along Frederica Road which has been under the care and protection of the St. Simons Land Trust since 2004. Through her communication with Arny, we have uncovered some fun and interesting information about the property’s original owners, Minna and Nathan Stoller, as well as information about the property itself. Read below for more information.

WHO WERE MINNA AND NATHAN STOLLER? 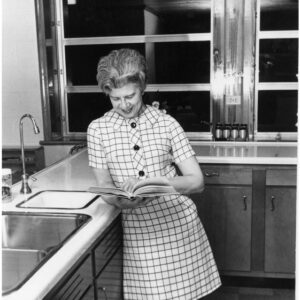 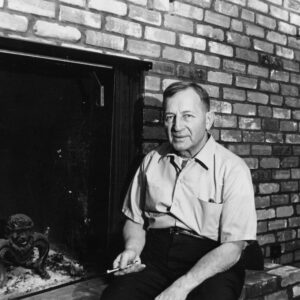 Minna (Lenkoff) Stoller was born on January 16, 1912 in Corydon, Indiana.  At a very early age she and her parents moved to Louisville, KY where she grew up. Minna was known throughout her family as a genius. She was introspective and always had a book nearby. Her vocabulary was unparalleled and she had quite a bit of Shakespeare committed to memory. She graduated from high school when she was 15 and after the Great Depression, went to college at the Cincinnati College of Pharmacy.

Nathan Stoller was born on April 28, 1908 in Louisville, KY.  He had social skills that made him a friend magnet.  He was both interested and interesting. He had a really good sense of humor, and was very smart. As an adult, Nathan wanted to become an engineer but was encouraged by his family to become a pharmacist. The drive to build things never stopped, though. He loved the process and, for many years, yearned to build something himself.

Nathan married Minna in January, 1933. Their son, Arny, was born in June, 1934 and two months later the family of three moved from Louisville, KY to Covington, KY where Nathan opened the Covington Apothecary. After Arny graduated high school, Nathan and Minna dropped him off at college and began driving south where the weather is warmer. Nathan and Minna wanted to find a piece of land large enough to have a lot of space in an area that was not heavily regulated so that they would be allowed to do all of their own building without needing licensed plumbers, electricians, etc. They wandered for a while before reaching Brunswick, GA. There they spoke to a real estate agent who suggested that they might want to look at St. Simons Island.

Once finding the property they loved on the island, Nathan and Minna began building what would be their home for the next 25 years. Arny believes those 25 years were, by far, the happiest years of Minna’s life. She simply lived and enjoyed her life more during that period than any other. 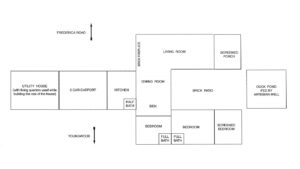 The house was a very large ranch house.  It included a “utility house”, a large, two car “car port”, the main house, a large brick patio, and a pretty duck pond. There was an enormous fireplace on one wall of the living room. It was in this fireplace that Nathan and Minna concealed a “time capsule” in which they left their notes that were discovered in 2003. The letters had been written in 1954 and indicate that after purchasing this land, the Stollers constructed their home between 1952 and 1954.

There was a winding driveway from the carport to Frederica Rd. It was winding for two reasons: First, Minna and Nathan didn’t want to cut down any more live oak trees than necessary, and, secondly, they really didn’t want the house visible from the road. They wanted it to be “buried” in the woods – and it was!

Minna flourished as a major help in building Stollaway, laying most of the brick, doing the math to come up with lengths and angles for rafters, mixing mortar and concrete and being an all around helper to Nathan on the building project. 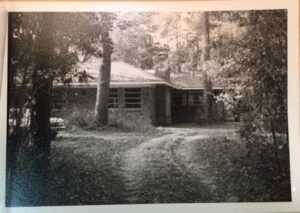 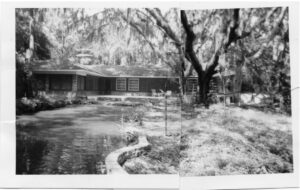 Front of home “buried” in the trees, Back of home with pond view

BECOMING PART OF THE FABRIC OF ST. SIMONS

After the house was finished Minna and Nathan were approximately 48 and 52 years old respectively and they went back to work.  Nathan obtained a license to practice pharmacy in Georgia and worked for a time in two different pharmacies on St. Simons Island. Minna also went back to work. She worked, for a number of years, at the Glynco Naval Base. 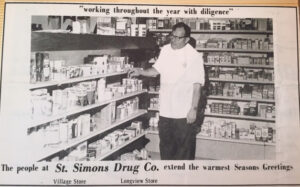 Aside from working in and around St. Simons Island, they became involved with a theater group called The Island Players.  Minna had always been interested in theater and had done some acting before marriage. She had also written some very short plays for religious organizations in Cincinnati. Nathan was on stage for at least one production. He was also involved in backstage activities at The Island Players.

Rather late in life, Nathan learned to fly.  He and Minna purchased a Cessna 150 airplane. Minna learned to be a very good navigator and they flew all over Florida and southern Georgia and to Cincinnati. 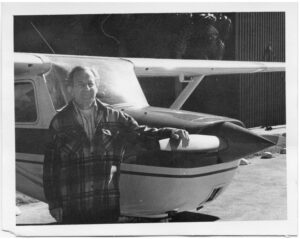 Nathan Stoller by his airplane

Neither Nathan nor Minna ever shied away from being unconventional.  Arny believes that they would like to be remembered as a couple who, in their 40’s, found St. Simons Island, purchased a 2 1/2 acre lot and, despite having very little previous building experience, designed and built, with their own four hands, an enormous, beautiful home. They went on to happily live in that home and become part of the fabric of St. Simons Island for many years.

“Nathan wanted to leave a “wake”. And, boy, did he ever leave one.” 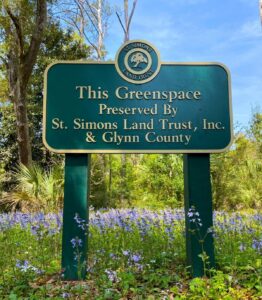 The Stollaway property, which contains 1.78 of the original 2.5 acres, was acquired by the Land Trust in May of 2004 with partial funding for the purchase coming from the Glynn County/Georgia Greenspace Committee.

Two brick columns dating back to 1954 mark the former entrance to the Stollers’ dirt and shell driveway that once led from Frederica Road to their home. A still visible marker on one of the columns contains the street address and the name of the family’s home: “Stollaway.” 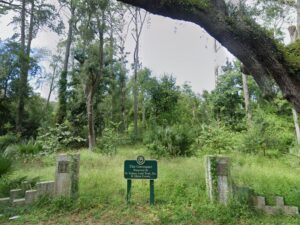 The Stollaway property provides habitat for native and migratory birds as well as small mammals and reptiles. The isolated wetlands onsite represent a threatened natural resource that is not protected by local, state, or federal regulations. As a result, these important resources are rapidly disappearing due to dredging, draining, and infilling from development or land conversion. Even the smallest patch of wetlands provides important functions to our natural environment, including flood prevention, water quality protection, fish and wildlife habitat, and increased biodiversity. By purchasing the property, the Land Trust ensured the protection of this freshwater resource.