Repairing the Tabby Barn at CPP 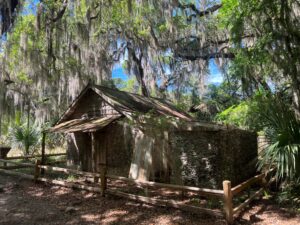 The tabby barn in the southern area of Cannon’s Point Preserve is getting a new roof! Having fallen into disrepair, SSLT staff consulted with the Office of the State Archaeologist regarding its repair and we are pleased that replacement of the roof has begun.

The tabby barn was originally built by the Taylor brothers — Charles, Arnold, Archibald, and Reginald — around 1925. The barn walls are made of tabby with wooden doors and rafters and a tin roof. The Taylors grew corn to feed their livestock, and this barn was originally built to store all the corn. The addition to the right side of the building was built later on and was used for potato storage. In the early 1970s, the barn was a filming location for 20th Century Fox’s Conrack, based on Pat Conroy’s novel The Water is Wide, starring Jon Voight. The building was used as an art gallery in the 1990s. Today, the barn is used as an educational piece to explain tabby construction and discuss past land use at Cannon’s Point Preserve.

Jamie Pearson, great grandson of Reginald Taylor is leading the repair work with our neighbor, Doug Cranford. Jamie has been involved with maintenance at Cannon’s Point Preserve for a number of years and takes pride in working on the land where his family previously lived and worked. We are very grateful to have Jamie’s skills, institutional knowledge of the property, and interest in this important project.