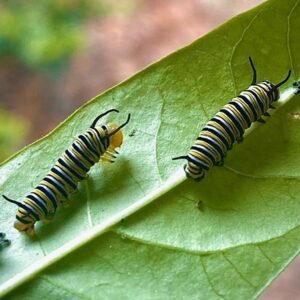 Thank you to SSLT board member Jim Barger for allowing our staff to “adopt” several monarch caterpillars this month!

The Bargers had an “embarrassment of riches” when it came to the numbers of monarch caterpillars feasting on the milkweed in their yard, so we quickly took Jim up on his offer to take in a few. Two of our adoptees are seen in the photo to the left, showing their distinctive white, black, and yellow stripes. The five new residents at the Land Trust’s office devoured our milkweed in short order, too, and each quickly grew plump and then formed its chrysalis. No matter how many times we watch this transformation — when the larva attaches itself to a surface, weaves its beautiful silk coat and forms its J — we are always awed. It’s a miracle in real time, and we love watching the pupa tremble in those first minutes/hours after it wraps itself in its damp, self-spun silk. And then we wait for the metamorphosis to be completed over the next 10 days when the butterfly will emerge in all its glory, dry its wings, and then fly off in search of a milkweed plant and a mate. 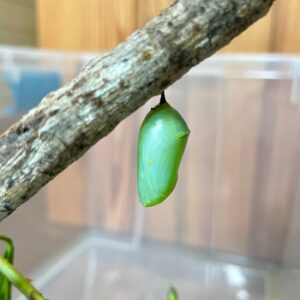 Monarchs (Danaus plexippus) are often called the “king of butterflies” because of their beauty and the large migratory range and exhausting flight of its fourth generation that will go through the entire life cycle once again in the fall — laying eggs on milkweed, transforming to caterpillar, then pupa, and finally adult butterfly. Just like there are four stages of a monarch’s life, there are three more generations that follow those first eggs laid in early spring, with that last generation coming of age in September of October, living eight or nine months, and migrating to Mexico or California. The only thing more inspiring than this generational metamorphosis is seeing thousands of monarchs in flight as they make their way south.

Since milkweed plants, that have traditionally flourished alongside roadways, in fields, and in vacant lots, are rapidly disappearing because of increased development and use of herbicides, Dalia Charles, our Membership Manager at the Land Trust, began growing milkweed (the exclusive food of monarchs). We learned from naturalists that there are native and non-native varieties of milkweed, including the commonly planted Mexican milkweed. So if you decide to start growing some of your own, be sure and plant species native to Coastal Georgia such as Carolina milkweed, pinewoods milkweed, fewflower milkweed, and butterfly milkweed. A warning, though: the milkweed plant is toxic, just as are the monarch caterpillar and butterfly. That’s their natural defense against birds and other predators. Just one more amazing feature about this miraculous species.